A giant mirror symmetry breaking observed in an atomic nucleus

An international team, gathered around an unprecedented experiment carried out at GANIL on LISE, has shown that certain states of 36Ca have a very significant difference in energy with the equivalent states of its “mirror” nucleus, 36S. This gap is the reflection of a very particular configuration of the nucleons which particularly highlights the subtle balance of forces in the atomic nucleus. These highly accurate measurements will provide an excellent test for theoretical models and improved predictions of nuclear reactions in explosive stellar sites. 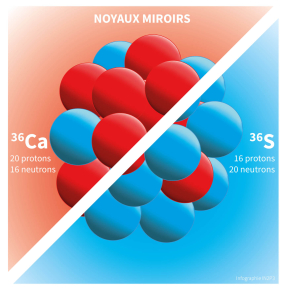 The calcium-36 and sulfur-36 mirror nuclei should, in theory, have the same energy states. Experimental measurement shows that this is not the case. Infographic IN2P3 Communication

In an atomic nucleus, the strong force, which ensures its overall cohesion, is insensitive to the charge carried by the protons and therefore makes no difference between protons and neutrons. She considers them as two representations of a particle, the nucleon. This property is at the origin of the so-called isospin symmetry, one of the most fundamental symmetries of the nuclear system, which states that so-called mirror nuclei, having the same number of nucleons, but an inverted number of protons and neutrons, all have the same structure and energy spectrum. The presence of charges in the nuclei nevertheless induces a breaking of this symmetry which, when it is important, can be used to finely understand the structure of the states concerned and to characterize the role of the forces in the nucleus.

A breaking of symmetry unprecedented in its amplitude

It is an unprecedented symmetry breaking in terms of its amplitude that was revealed at GANIL by a team made up of local scientists, the IJCLab and RIKEN, by comparing the nuclei of the 36Ca mirror pair (20 protons and 16 neutrons) and 36S (16 protons and 20 neutrons). This pair has three excited states (1+, 2+, and 0+2) in which symmetry breaking is abnormally strong. Indeed, while the energy difference observed between mirror nuclei, the MED, for “Miror Energy Differences”, is located for the majority of cases at a few tens of keV at most, it reaches here 250 keV for the 1+ states and 2+ and even 500 keV for the 0+2. For the latter, this is the largest difference in mirror energy known, if we exclude the few rare cases involving ‘fleeting’ states, not bound by nuclear interaction. 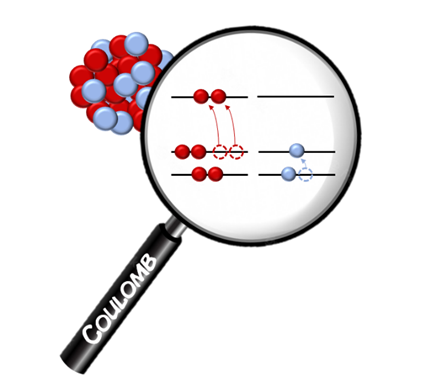 The 0+2 excited state of 36Ca (20 protons, 16 neutrons), discovered in this experiment, and whose configuration corresponds to a jump of 2 protons (red) and a neutron (blue) on the higher orbitals, where the number of protons and neutrons is exchanged (16 protons, 20 neutrons). This change in energy is due to the Coulomb interaction, which acts as a magnifying glass, revealing the very particular structure of this state.
Image IN2P3 – GANIL

The 36Ca isotope was studied at the Grand National Accelerator of Heavy Ions in Caen. The team discovered these three excited states of 36Ca and demonstrated their specific structure, using reactions where one and two neutrons are transferred from radioactive beams of 37Ca and 38Ca, with a state-of-the-art experimental device consisting of a cryogenic hydrogen target, segmented silicon and CsI MUST2 detectors, CATS beam trackers and a detection device for nuclei produced at the front angles.

By comparing the states of 36Ca with those known in 36S and produced in the mirror reaction, physicists have shown that, despite their differences in energy, the same excited states are populated with the same probabilities. This means that their respective structures remain similar. This study, supported by theoretical calculations of the shell model type, made it possible to better understand the large values ​​of MED, in particular that for the excited state 0+2 where the MED is equal to 500 keV. For this state, the dominant configuration corresponds, in 36Ca, to the promotion of a pair of protons and a neutron to higher orbitals (see illustration), resulting in a change in the shape of the nucleus. In the 36S mirror nucleus the same state will be formed by a jump of 2 neutrons and 1 proton to the upper orbitals. The jump of 2 protons in 36Ca leads to a reduction in Coulomb’s repulsion, compared to its ground state, while the jump of a proton in 36S leads to an increase in Coulomb’s repulsion, compared to its ground state. ground state. These two effects cohesively combine to lead to one of the largest MEDs ever observed in the nuclide map. The Coulomb force acts, through its effect on the MED, like a magnifying glass making it possible to probe the structure and the shape of the excited levels, without disturbing their configurations.

The results, recently published in Physical Review Letters, advance knowledge of the structure and magical character of proton-rich calcium isotopes. They also constitute excellent tests of theoretical models, in particular those known as ab-initio resulting from fundamental properties and symmetry of nuclear interactions. Finally, the understanding of this mirror symmetry breaking also has an important impact in the understanding of the balance of forces in the atomic nucleus and in the calculation of the probabilities of nuclear reactions taking place in explosive stellar sites, as published by the same team in Physical Review C.