The S3-Low Energy Branch (LEB) will be located after the final focal plane of S3. The S3-LEB general layout will be developed in 3 successive stages: Phase 0 corresponds to the REGLIS3 setup, Phase 1 to the coupling with a high-resolution mass spectrometer, and Phase 2 to the coupling with a dedicated decay station and DESIR. Phase 0 is funded by the French National Research agency, and Phase 1 is almost completely funded. The REGLIS3 setup of the S3-LEB will consist of a gas cell where the heavy-ion beam delivered by the S3 spectrometer is thermalized and neutralized. The reaction products will be transported by the gas flow toward the exit hole and evacuated through a de Laval nozzle. The coupling with a narrow-bandwidth, high-power, high-repetition pulse rate, laser system will assure the selective and efficient ionization of the atoms of interest (Z selection).

Singly-charged ions can be extracted directly from the gas cell in some case, for example, when atomic transitions are not known. Also, resonant ionization of isotopes in the gas jet streaming out of the cell can be used for high spectral resolution measurements. Placed at the exit of the gas cell, a radiofrequency ion guide will capture the photo-ions and transport them with a high efficiency to the low-pressure zone, thereby achieving good emittance of the produced beam prior to its injection into a quadrupole mass filter. After a high-resolution mass selection (A selection) based on the time of flight discrimination of ions, selected isotopes will be transported to a detection station where ion counting as well as observation of the characteristic radioactive decay of the isotope of interest will be provided. The resonance ionization of the atoms will be performed with a two-step or a three-step excitation scheme. Laser spectroscopy will be performed by scanning the laser frequency of one atomic transition while detecting the number of photo-ions or the corresponding emitted radiation.

The major attributes of REGLIS3 will be the efficiency (the study of nuclei produced in very small quantities, down to 0,1 part/s, will be possible), the selectivity (it will allow suppression of unwanted isotopes with a demonstrated resolving power lower limit of 1/10 000), the small time delay (short-lived isotopes, down to 40 ms, could be studied) and the spectral resolution down to 200 MHz (sufficient to determine the isotope/isomer shift and hyperfine structure for most of the medium-mass and heavy-mass isotopes). The total expected efficiency of such a device is 4 to 24%. S3-LEB will allow the measurements of the ground state properties of nuclei such as the charge radii, the electromagnetic moments and the nuclear spins, giving access to the distribution of the nucleons inside the nucleus and providing information on structural changes throughout the chart of nuclei.

The observed systematics of these quantities will give insight on the collective properties and deformation, nu- clear shape coexistence and shell effects. The occupation of single particle levels and the valence nucleon wave functions are reflected in the spins and magnetic moments. S3-LEB could also be used to provide very pure radioactive ion beams at low energy for mass measurements or beta decay studies for instance. Among the letters of intent submitted for the next phases of the SPIRAL2 project there are eight that require beams from S3 to be delivered to the DESIR facility through the low- energy beam line, an indication of the important strategic role of the S3-LEB. 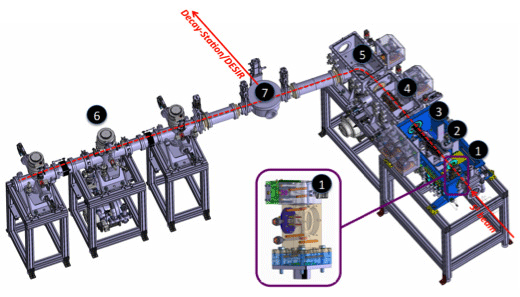