INDRA (“Identification de Noyaux et Détection avec Résolutions Accrues”) is a 4pi multidetector of charged particles in use since 1993 for the study of nuclear reaction dynamics and the thermodynamics of hot nuclei, with the ultimate goal of determining the equation of state of nuclear matter which is an essential ingredient for understanding either the structure of exotic nuclei or astrophysical phenomena such as neutron stars and type II supernova explosions. 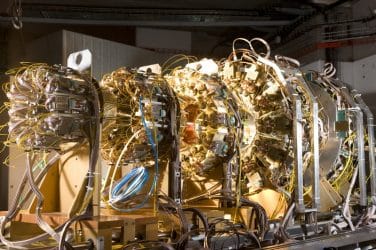 INDRA is a highly segmented detector for light charged particles and fragments composed of 336 independent detection modules (telescopes) positioned in axially-symmetric rings covering polar angles from 2 to 176 degrees. It covers geometrically 90% of the 4pi solid angle around the target and has very low identification thresholds (~1 A MeV), achieved by using as first stage of the telescopes ionization chambers operated with low pressure C3F8 gas. Residual energies are measured by a combination of silicon (150 or 300 µm thick) and/or caesium iodide (5 to 14 cm in length) detectors as second and/or third stage of the telescopes, depending on polar angle. At very forward angles (2 to 3 degrees) the original ring of phoswich scintillators (NE102/NE115) used in the first 3 campaigns of experiments was replaced in 1998 by 12 Si(300µm)-CsI(14cm) telescopes.

Detector signal treatment is performed through specifically designed modules, most of which are in the VXI standard. This standard allowed to considerably reduce the number of electronic modules required by the 640 detectors by regrouping many functions in the same module. Charge preamplifiers for ionization chambers and silicon detectors are mounted in the vacuum chamber, as close as possible to the detectors, while all the electronics racks are in the beam cave, the VXI standard providing full remote control including multiplexing of analogic and logic signals to be visualized in the acquisition room, while experiments are running. The innovative “asynchronous” trigger system allows to record reactions from low to very high multiplicities (from peripheral to central collisions) with low dead time and very little bias. The custom-made INDRA Selecteur VXI trigger module is also extremely flexible, allowing easy coupling with other detectors and acquisition systems such as Chimera (1997), VAMOS (2007), and now FAZIA (2018-?).

Unit charge resolution up to Z~54 is achieved over a large dynamic range in energy (5000 to 1 for silicon detectors) for fragments punching through the silicon detectors. Heavier fragments (up to lead) stopping in the silicon detectors can be identified with resolution of a few Z units from their energy loss in the ionization chamber, with low identification thresholds of ~1 AMeV. Light fragments punching through to the CsI detectors can be isotopically identified using the fast and slow components of the scintillator light output up to Z=5 in the best cases. The gradual replacement of the 300µm Si by 150µm thick detectors (from 2001 onwards) allows for certain telescopes (up to 45 degrees polar angle) to achieve isotopic resolution for fragments up to Z=8; in addition to this, for some experimental campaigns mass resolution up to Z=6 has also been possible even in the 300µm thick Si-CsI telescopes. Further improvement even for existing data is possible (see O. Lopez et al., “Improving isotopic identification with INDRA Silicon–CsI(Tl) telescopes”, Nuclear Inst. and Methods in Physics Research, A 884 (2018) 140–149).

During the first 10 years of operation, experiments with INDRA were run in campaigns using many weeks of beam time in order to optimise the (large) effort of data reduction required to reconstruct, identify and calibrate the particles in each recorded collision. In more recent years, both advances in computer power & software tools, and a reduction in available beam-time, have meant a focus on more individual experiments.

The following non-exhaustive list gives some of the major works of the collaboration, sorted according to the most recent data they contain (i.e. under “4th campaign” are works based on data from that campaign, but also potentially from the previous campaigns)