December 2021 marks the end of an era as the SPIRAL2 project is now in routine operation and experiments using the Neutrons for Science Facility (NFS) have been started.

The initial steps, included the challenges associated with the design of this high-power accelerator and completing and operating the installation as per the regulations of the French Nuclear Safety authorities.  The final challenge of validating the functioning of the LINAC, as planned, includes demonstrating that the beam losses are below the required design limit. The importance of the latter can be appreciated by the fact that in case of   beam losses when operated at the maximum intensity, even if   only for ~35 µs, can substantially damage the LINAC. The criteria for the end-of-the-project were to provide the full intensity of the charged particle beams, that required to produce the most intense neutrons beams in the world covering the energy range from 1 to 40 MeV. To achieve this, the NFS facility, requires the continuous production of beams of protons or deuterons, which are suitably pulsed at the maximum intensity of 5 mA. This corresponds to an average intensity of 50 µA for protons and deuterons accelerated to 33 MeV and 40 MeV, respectively.

This July, a beam of alpha particles was successfully tuned to a nominal energy of 80 MeV through the LINAC. It was preceded by earlier successful verification in November 2020 of the   acceleration of a 16 kW proton beam (10% of the maximum power).  This served   as a precursor for accelerating the 5 mA deuteron beam later in July, subsequently a power of 10kW was reached in November. The increase in deuteron power was achieved by gradually increasing the available duty cycle (up to several milliseconds) of the beam at the nominal peak intensity of 5 mA, during which the beam carries the characteristic full power of ~200kW. These steps demonstrated   that with low beam loss attained, the LINAC will be able to be operate at 100% of the duty cycle, thus at the maximum nominal power of ~200 kW.  The experiments in the NFS experimental area, require pulsed beams, so as to measure the time-of-flight of the neutrons. The goal was reached in September 2021 (Fig. 1), when a beam of ~47 µA deuterons was produced for the first time (there is a safety limit of 48 µA), with the injector operating at its maximum power and a bunch selector accepting 1 out of every 100 beam pulses. This marks the completion   of the commissioning of the LINAC and the beginning of routine operation for experiments, with deuteron and other beams, approved by the international GANIL Program Advisory Committee, PAC) at NFS. 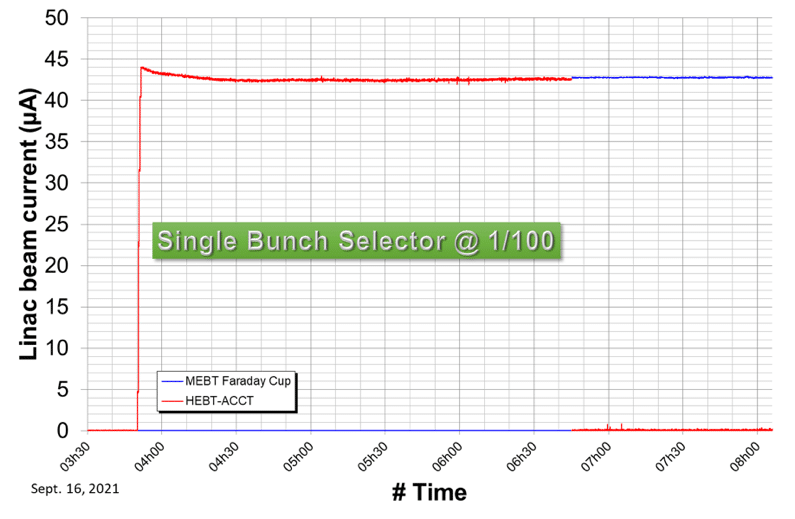 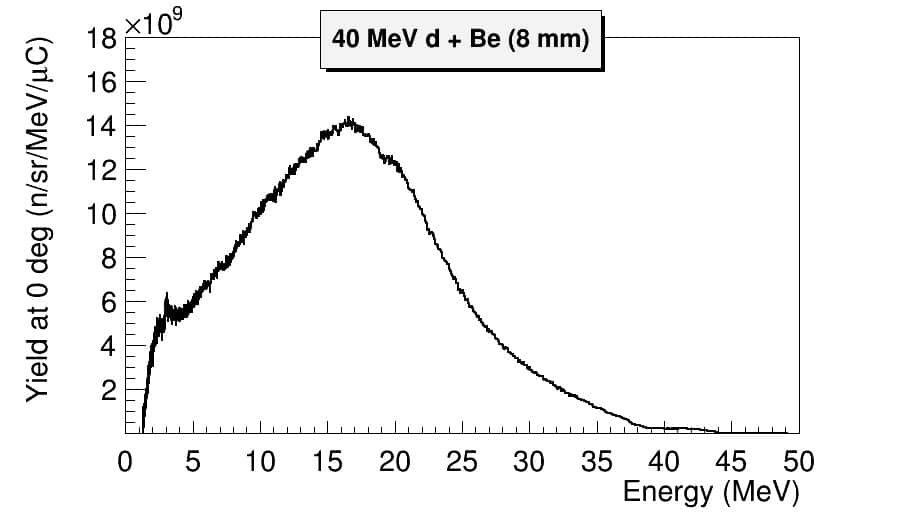 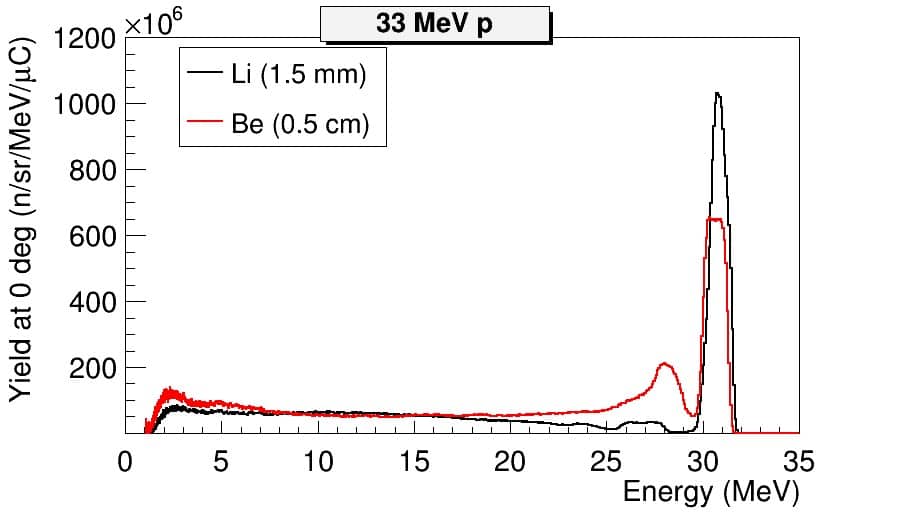 Fig 2: Continuous and quasi-mono-energetic beams of neutrons produced at NFS. Neutron yields at 0° produced by a) 40 MeV deuteron beam on a Be (8 mm) convertor (upper panel). b)  33 MeV proton beam on thin lithium and beryllium convertors.

Since September 2021, four experiments and two test experiments approved by the PAC have already been successfully performed at NFS using a variety of setups. These included cross section of light charged particles in neutron induced reactions on a carbon target using the MEDLEY setup, measurements of the O(n,α) cross-sections up to 20 MeV using the SCLAP setup, the measurement of the 238U(n,xn) and (n, fission) cross sections using the SCONE setup, and measurement for the productions of the short-lives isotopes in proton-induced reactions on Fe using the Fast rabbit setup. Additionally test experiments using (n,n′g) to study the pygmy dipole resonance using a part of the PARIS and Monster detector arrays and (n,xng) to study nuclear structure for nuclear energy applications were also performed.  The success of these experiments and low backgrounds have demonstrated that the NFS facility is fully operational for variety of experimental campaigns.

SPIRAL2 is the new major upgrade of the GANIL accelerator facility (SPIRAL1 was commissioned in 2001). Achieving the design values of this high-power accelerator is due to the involvement, throughout the duration of the project, of various collaborators and partner laboratories. The LINAC and the NFS facility, now in operation, adds to the versatility of the GANIL where the stable beams ranging from proton to Uranium, beams of short-lived rare nuclei (produced by fragmentation and Isotope Separation On Line techniques) and neutrons beams over a very wide range of energies are now available. These beams coupled with the state-of-the-art detectors and spectrometers are available to the international user community to address a wide range of open physics questions. 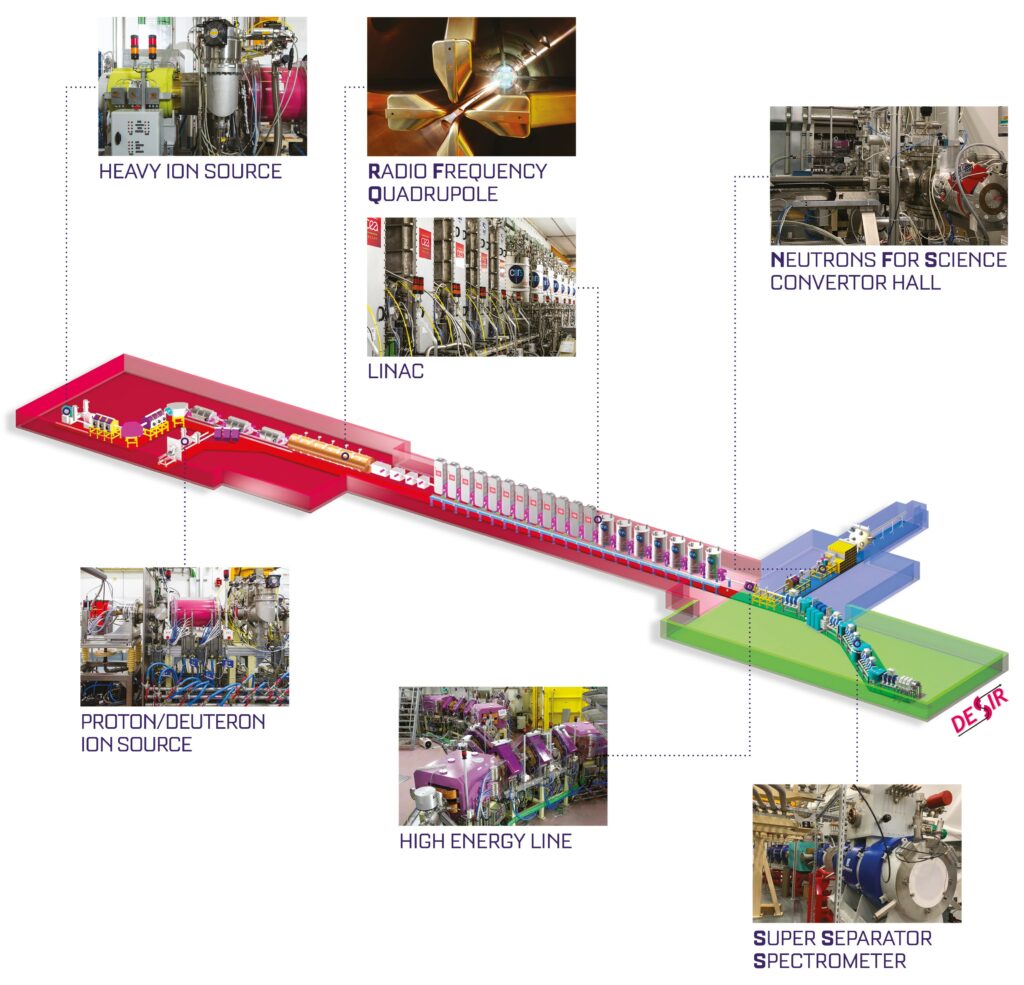