The balance of tin 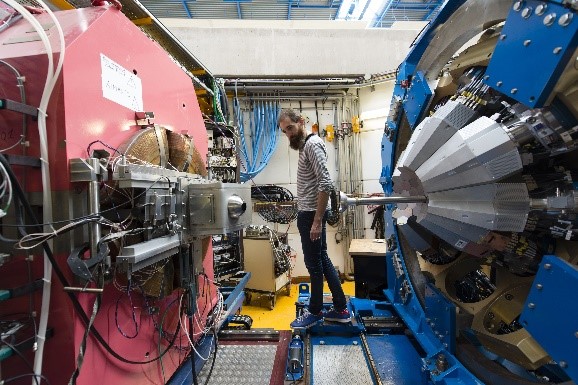 The complexity of the atomic nucleus reflects a multi-component character of the « nuclear force » that holds protons and neutrons together. Proper separation and characterization of each of these components represents a challenge for both theoretical and experimental nuclear structure studies. The tin isotopes (nuclei with Z=50 protons and a number of neutrons depending on the isotope) provide ideal opportunities to study the competition between two of the nuclear force components: the so-called pairing, related to the marked tendency of protons and neutrons to form pairs in the nuclear matter, and the so-called quadrupole interaction term, describing the natural susceptibility of nuclei to adopt deformed shapes. Though of a different nature, these two interaction terms contribute to the goal of achieving an optimum organization of nucleons in the atomic nucleus that will minimize its energy.  Previous works have demonstrated that a shift of balance between these two components takes place when approaching tin-100, and this observation provided important constraints for theoretical descriptions of this so-called “doubly-magic” nucleus. Having the same numbers of protons and neutrons (Z=N=50), 100Sn is a key nucleus to validate model descriptions of exotic nuclei.

A recent experiment performed at GANIL in the framework of the international AGATA collaboration, by a team led by Legnaro National Laboratories (Italy) with a strong involvement of scientists from the IRFU Nuclear Physics Division (DPhN) in Saclay and from GANIL, has demonstrated that the equilibrium between these two terms of the nuclear interaction is more complex than previously thought. This high-precision measurement of lifetimes in tin-108 (N=58) benefited from a combination of the AGATA gamma-ray array [1] with the VAMOS spectrometer [2] and provided evidence that while the structure of the first excited state is dominated by the quadrupole term, the properties of the second excited state, situated right above it, result from an unexpected balance between the two terms (quadrupole and pairing). This result challenges the existing theoretical descriptions of tin-100, a nucleus that is a key to our understanding of exotic nuclei and as such will be a subject of detailed experimental studies with the future S3 spectrometer in GANIL. This study, for which Marco Siciliano was recognized with the GANIL Thesis Award in 2019, has recently been published in Physics Letters B [3]. 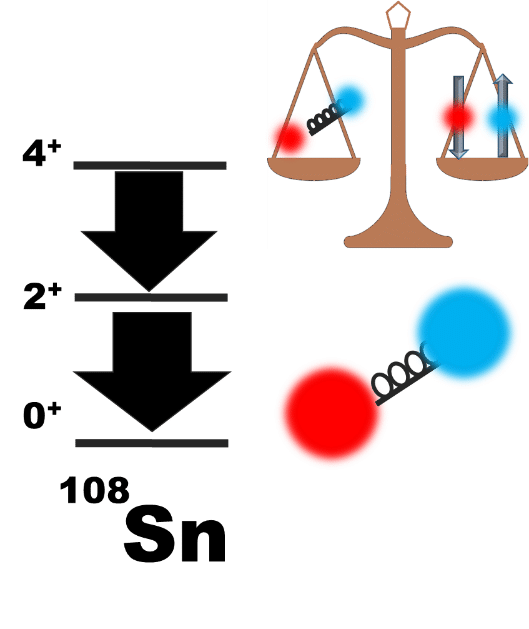 Figure 1: Illustration of the balance between the quadrupole (left pan) and pairing (right pan) interaction components between two nucleons. On the level scheme of tin-108, the 0+ state corresponds to the lowest possible energy of the nucleus (ground state). The 2+ and 4+ states are the first and the second excited state, respectively. While the structure of the 2+ state is dominated by the quadrupole term of the nuclear interaction, a proper description of the 4+ state requires, unexpectedly, a balance between the two components.

For over a decade, the nuclei providing the best example of structures dominated by nucleon-nucleon pairing have been the heavy tin isotopes. The importance of this mechanism was evidenced in stable tin nuclei (number of neutrons N between 62 and 74) by the observation of an almost constant behavior, as a function of N, of the excitation energy of the first excited state (2+) and of the reduced transition probability from this state to the ground state (see Fig. 2).

Figure 2: Reduced transition probability from the first excited state, 2+, to the ground state, B(E2; 2+->0+), as a function of the number of neutrons in each of the tin isotopes.

When moving from the stable tin nuclei towards the doubly-magic 100Sn (N=Z=50), one can see that the transition probabilities from the first excited state to the ground state start to follow a different trend from the expected black parabola shown in Figure 2. Theoretical studies attributed this change to the dominance of the quadrupole interaction term over the pairing term for nuclei with the neutron number of 64 or less (cf Fig. 2). The information on the second excited states (4+) in light tin nuclei is still rather limited. The reason for that is the presence of isomeric states[i] at relatively low energy, which strongly complicates direct lifetime measurements that bring information on transition probabilities. To avoid “traps” created by these isomeric states, a novel approach has been used. While neutron-deficient nuclei are usually produced via fusion of two lighter nuclei, in this experiment the 106,108Sn isotopes (Z=50, N=56,58) were produced in collisions of two heavy nuclei: a beam of 106Cd (Z=48, N=58) ions, accelerated by the GANIL cyclotrons, impinged on a target of 92Mo (Z=42, N=50). During the collision, the beam nuclei « snatch » two protons from the target, transforming themselves into tin isotopes (Z=50). Such a reaction mechanism suppresses the population of the isomeric states and allows a direct study of the de-excitation of the 2+ and 4+ states lying below them. The produced tin nuclei were subsequently identified in the VAMOS spectrometer, while the photons resulting from the de-excitation of the 2+ and 4+ states in 106Sn and 108Sn were simultaneously detected by the AGATA array. 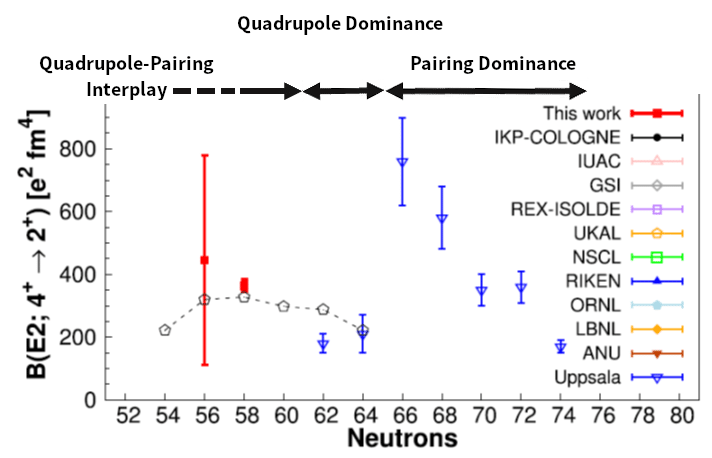 Figure 3: Reduced transition probabilities from the second excited state (4+) to the first excited state (2+), B(E2; 4+->2+), as a function of the number of neutrons in each of the tin isotopes. The measurement of lifetimes of the 4+ states in 106Sn and 108Sn yielded the two values marked in red. These reduced transition probabilities were compared to theoretical predictions represented by open black pentagons.

The extracted result from the high-precision measurement of the lifetime of the second excited state (4+) in 108Sn was compared with the theoretical calculations (cf Fig. 3). While the properties of the first excited state (2+, cf Fig. 2) underline the importance of the quadrupole term of the nuclear interaction, in agreement with the existing descriptions of nuclei in the nearest vicinity of 100Sn, the new experimental information on the second excited state provides the first evidence for a balance of the quadrupole and pairing terms, showing that the latter cannot be neglected in the description of nuclei in this mass region. This result casts some doubt on the validity of the existing theoretical calculations for nuclei in the vicinity of 100Sn and opens new perspectives for experimental studies in this mass region, which will be at the heart of future experiments at GANIL in the framework of the S3 project.