Convenient location of a near-threshold proton-emitting resonance in 11B

Nuclear clustering is arguably one of the most mysterious nuclear phenomena. Numerous examples of cluster-like weakly-bound and unbound states in light nuclei can be found in the proximity of particle decay thresholds.

These include the ground state of the Borromean halo nucleus 11Li and the famous Hoyle resonance in 12C that is indispensable for the synthesis of heavier elements in stars.

Theoretically, it was argued that the appearance of such states is a generic phenomenon in any open quantum system, in which bound and unbound states strongly mix which results in an ‘aligned eigenstate’ of the system carrying many characteristics of a nearby decay channel.

In the recent paper, published in Phys. Rev. Lett., theorists from INP Cracow, GANIL, and FRIB tackled the recently-reported ß-delayed proton emission of the neutron halo ground state of 11Be.

The puzzling decay has been explained by the existence of a resonance with total angular momentum and parity Jπ=1/2+ in 11B, carrying many characteristics of a nearby proton-decay channel. 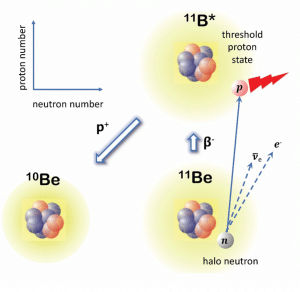 Figure: The ß -delayed proton emission of 11Be. The neutron halo ground state of 11Be undergoes beta decay to an excited state of 10B, which lies just above the proton-decay threshold. This state subsequently decays to 10Be by emitting a proton.