Many results have been achieved over the past few months.

The RFQ RF commissioning was improved with a better control of the RF chains and thanks to the long time spent on RF commissioning. The cavity can now sustain its nominal voltage (114kV vane voltage for the A/Q=3 particles) for a few hours, while a reduced voltage of 105kV can be maintained without any problems. Nevertheless, at the nominal voltage, most of the sparks still create difficulties in the RF chains resulting in long periods of beam shut down (30 minutes to 2 hours). Improvement in the LLRF (Low Level RF), the amplifiers and the cooling system are ongoing and progress has already been observed. The first successful tests showed that the down time can be reduced to about 3 minutes, increasing the availability from 75% to 98%.

The cavity always operates in CW (Continuous Wave) mode. We have defined three reference particles for the operational qualification of the RFQ cavity and the measurement of the beam characteristics behind the RFQ:
· Up to 5mA proton beam

The oxygen beam requires the nominal vane voltage in the cavity. It is the most challenging beam for the operational qualification. After the qualification of our three reference particles, 40Ar14+ could also be measured, 20eµA beam current. Measurements with all beams validated the injector performances. As the injector results can be highlighted with the oxygen example, the following results are mostly focused on this beam. All the longitudinal emittances (reference beams and the 40Ar14+) are within expectations, equal to the calculated values. 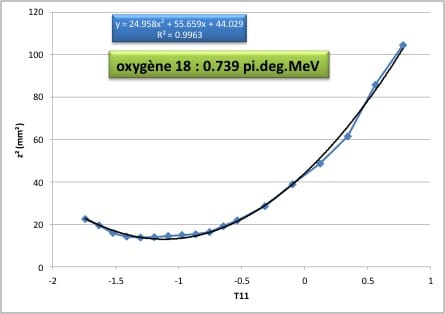 The RFQ transmissions have been validated with beam (in CW mode), at nominal voltage. They were found to be close to the design value ~100%. The CW 18O6+ beam was successfully accelerated either at the reduced voltage of 105kV or the nominal voltage of 114kV.

The diagnostic plate serves also as a development platform for the accelerator diagnostics and the tuning procedure of the linear accelerator.

What next? The D-plate needs to be removed before the start of the LINAC commissioning. We are expecting the Nuclear Safety Authority authorization next year.The D-plate will be removed by the end of November, and the first MEBT beam could be accelerated in early 2019.