The shapes of atomic nuclei are known to evolve as a function of neutron and proton numbers. This evolution is usually gradual. The chain of zirconium isotopes represents a notable exception, exhibiting one of the most dramatic shape changes in the entire nuclear chart: from a spherical ground state in in 96Zr (with 40 protons and 56 neutrons) to a strongly deformed one in 100Zr (with 40 protons and 60 neutrons).

An international team, led by researchers from CEA Saclay in France and the University of Oslo in Norway, have studied the isotope with 58 neutrons, 98Zr, to find out if the change in shape is very rapid or more gradual. What they found is a much more complex scenario where three different shapes, spherical, slightly deformed, and strongly deformed, coexist within the same atomic nucleus.

In an experiment performed at the Grand Accélérateur National d’Ions Lourds, France’s national laboratory for heavy-ion research in Caen, the team measured lifetimes of excited quantum states in 98Zr. The lifetimes of the excited states carry information about the underlying deformation. Simply speaking, larger deformation leads to stronger decay probabilities and shorter lifetimes. To produce 98Zr in excited states, a thin foil of beryllium was bombarded with an energetic beam of uranium ions. When the uranium and beryllium nuclei fuse together, they form the heavy actinide nucleus 247Cm (Curium-247). It almost immediately breaks up into two fragments, with a small chance of producing 98Zr as one of them. The researchers used the VAriable MOde Spectrometer (VAMOS) to identify the fragments, and the detector EXOGAM to measure gamma rays from the excited states in order to study their lifetimes, which are in the range of picoseconds (10-12 s). 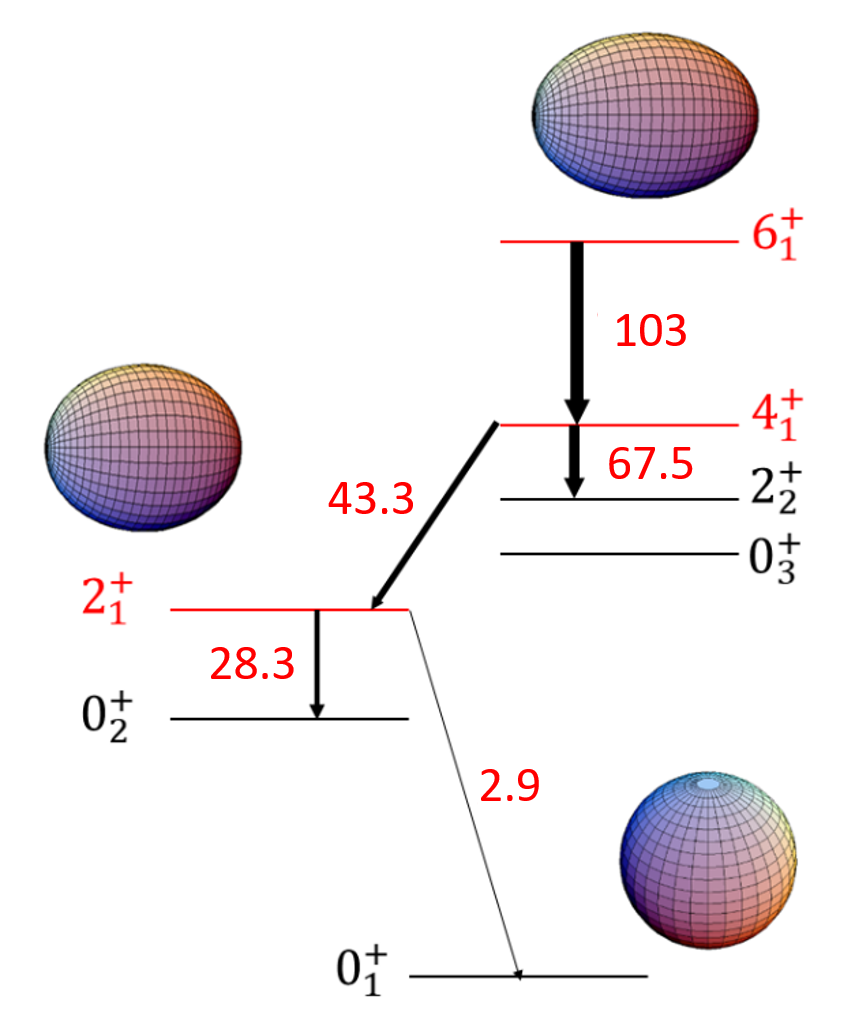 The team was able to measure the lifetimes of several excited states (shown in red in the figure), and, consequently, obtain their decay probabilities to the states below (given in so-called Weisskopf units). The results indicate that the ground state of 98Zr is spherical, as it is the case for its lighter neighbour 96Zr. A first excited structure at low excitation energy is consistent with a modest deformation. A third structure, at slightly higher excitation energy, was found to have a very large deformation, similar to the one of the ground state in 100Zr. It is thus concluded that the ground-state and excited configurations are exchanged when going from 98Zr to 100Zr, which makes the shape change so rapid.

The detailed results on this quantum phase transition and shape coexistence, which was published in Physical Review Letters, represent a benchmark for nuclear structure models.